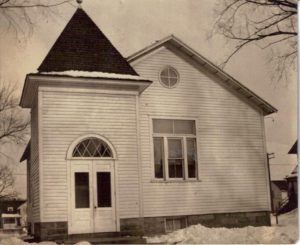 Church of Baraboo traces its roots to the spiritual re-awakening that occurred in this country during the 19th century.  Baptist preacher William Miller and others began to speak with renewed vigor about the imminent return of Jesus Christ.  This Adventist message was brought into Sauk County during pioneer days by preacher-farmer G.W. Barnes, and the scholarly William Sheldon.  Records document Barnes holding “Bowery Meetings” in Greenfield Township east of Baraboo in the 1850s.  As President of the newly formed Wisconsin Advent Christian Conference in the 1860s, Sheldon often held revival meetings by erecting his large tent at many sites around Baraboo, including the shores of Devil’s Lake.

In June of 1883 the Wisconsin Advent Christian Conference held a campmeeting in Baraboo just east of Camp Street.  Twenty-two converts were baptized following this event.  Lafayette Prothero, one of the young converts, was chosen to be the first leader of this newly formed group of Adventists.  In June of 1887 another campmeeting was held in Baraboo at the same site.  After this ten-day gathering, William Sheldon, who was still Conference President, appointed Otis G. Watkins and Mrs. Louisa Capener as a committee to secure preaching for Baraboo.  The committee secured Elder Amansa Barber as their first pastor at two hundred dollars per year.

Early services were held in the Gattiker building, which still stands in downtown Baraboo.  In 1888 the Wisconsin Advent Christian Conference convened at this location with young Orrin Roe Jenks being the principal speaker.  Jenks, who later became President of Aurora University, remained several days after the conference and by his preaching greatly strengthened the congregation.  Being denied further use of the Gattiker building, the last meeting was held there February 23, 1889. 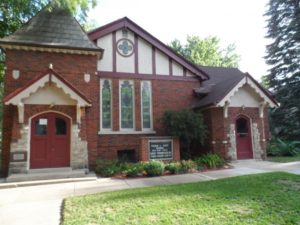 On April 10, 1889 the young congregation purchased a lot at 409 4th Street in Baraboo and began the construction of a new church building.  The new church, which was to be officially known as the Advent Christian Church of Baraboo, was dedicated on August 25, 1889.  Elder B. N. Meigs of Arena preached the dedication service after which pledges of over two-hundred dollars were raised to help pay the indebtedness.  The churches oldest known Covenant and Constitution indicates the church had 95 members in 1892.

On October 13, 1912 Rev. E. O. Coontz became Pastor of the Advent Christian Church of Baraboo.  The church would experience tremendous growth during his time in Baraboo.  In 1920 a lot was purchased near the church and a parsonage was built.  The congregation continued to grow through the 1920s until the small church building wasn’t large enough anymore.  A church committee met with a committee from the Fairfield Advent Christian Church, and it was decided that the two congregations would be merged.  Rev. Coontz pastored both churches in those days.  The two groups agreed to share in the cost of expanding and remodeling the Baraboo church.  The building was greatly expanded and improved with a brick veneer finish and new stained glass windows.  The interior was remodeled, a baptistry was added, and the basement was expanded for social gatherings.  The dedication service as held on March 15, 1931 with many conference and denominational leaders present.

When Rev. Coontz resigned in 1945 he had led the church for 33 years.  Pastors to succeed him included John Crouse in 1948, Clio Thomas in 1954 and Louia Gransee in 1962.  Around 1950, the building was expanded again to provide 6 new Sunday-School rooms.  In the late 1970s the house next door to the church was purchased to again address space needs.  Also in the late 1970s the name of the church was changed to New Life Community Advent Christian Church to better express the beliefs and outreach goals of the congregation. 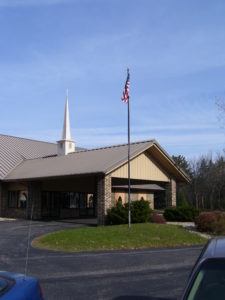 In 1981 Rev. Jim Crouse began his 21 years as Senior Pastor at New Life Community Advent Christian Church.  By the late 1980s church growth was again creating space needs and parking problems.  In 1989 the church purchased 7 acres of land on the north side of Baraboo.  In 1992, the current church facility was constructed at 1919 Elizabeth Street. Since moving to the current location, Rev. Samuel Walsh and Rev. Jesse Stevens have also served as Senior Pastors.