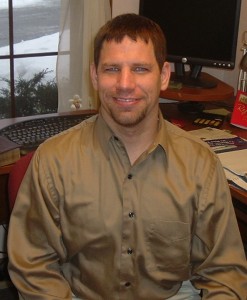 and together they have two boys Solomon and Josiah. Jesse and Sherry met when they went to college together at Aurora University, and after both had graduated, they got married and moved to Fort Worth, TX. Once there, Jesse enrolled in seminary at Southwestern Baptist Theological Seminary, where he would eventually earn his Master’s of Divinity degree. The first church Jesse served in after seminary was New Life Church. He served here for three and a half years from 1998-2001 as an Associate Pastor He and Sherry then moved to Los Angeles, CA, when Jesse was asked to be solo pastor at Chatsworth Lake Community Church. During the 7 years of ministry in Chatsworth, Jesse became ordained and the couple had Solomon then Josiah. The Stevens family eventually came back to New Life Church in WI, when Jesse was asked to serve as Senior Pastor in August of 2008.

Reverend Jed Crouse is a graduate from Bethel College with a major in Biblical Studies and Youth Ministry.  He currently serves as an Associate Pastor of Youth and Outreach at New Life. Jed has served at New Life with his wife Traci since 2004, however, Jed has always called New Life his home church and Baraboo his home town.

When not working at New Life, Jed leads the Navigators Bible Study at the University of Wisconsin Baraboo/Sauk County Campus and volunteers as a circus chaplain. He spends his free time clowning and performing magic under the alias of Presto the clown.  Jed hopes to continue to be able to use his unique personality, off-beat sense of humor, and passion for entertaining, to share his love for Christ with others.